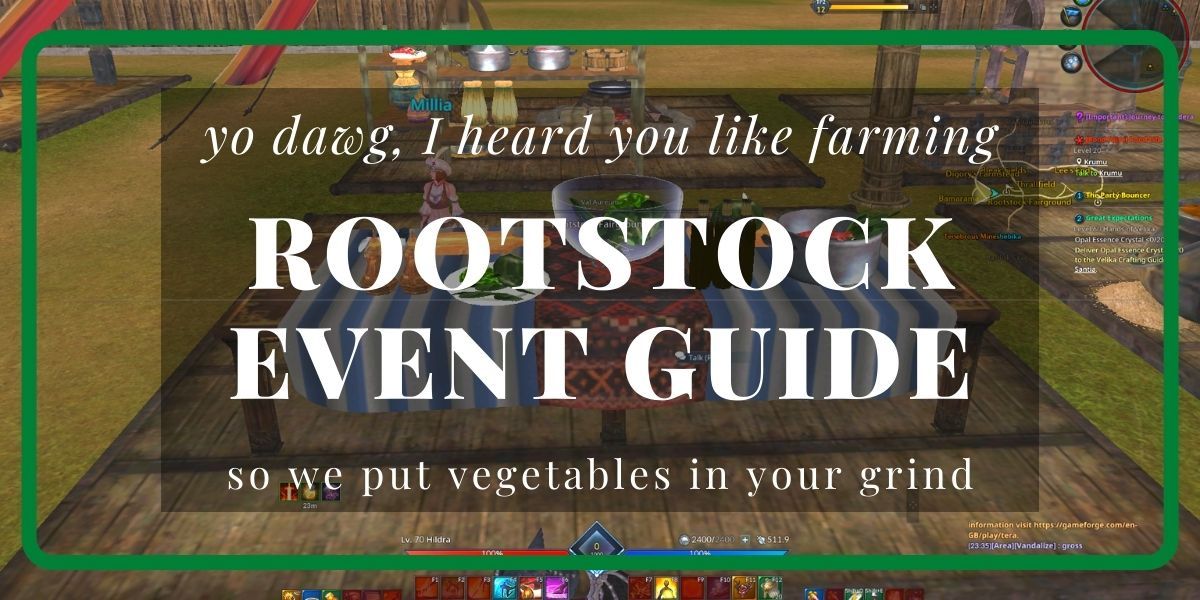 Hey, it's a Fall event. You do mini-games to gather daily-limited items and craft food items. Most of the food items are defunct now (not worth making because the buffs are moot) but you could farm some Lamb Bulgogi if you're into that kind of thing.

This guide covers the quest unlock steps and then has a reference for which events give you what and what is needed to make the different Rootstock foods.

How to Unlock Everything

How to get to Rootstock

There will probably be a free teleport option, but you can

Start the Quest Line with [Rootstock] Going to the Fair

Talk to Melsa in the middle of the fenced off area adjacent to the crop fields and the Bamarama arena.

[Rootstock] Get Back to Your Roots

Go to the field and walk around the quest markers. It will make you go past the Flame peppers, Cobseed, then Taproot. Go gather a Mudroot afterwards and bring it back to Melsa.

After talking with Melsa, go to Millia at the adjacent table. You'll get a Mudroot Salad recipe and the other ingredients needed.

Right click on the ingredient to use it. It won't be consumed. Go back to Melsa

Talking to Melsa will progress the quest to go talk to Lein. It will also unlock 2  quests:

Lein is located by the Bamarama arena. Talk to him and he'll tell you about Bamarama then direct you to Digory 's farm. Go back to Melsa and use the teleport Popo next to her to get to Digory Farm.

Talk to Digory to activate the next quest step.

Hit a ball around the area for 30 seconds with an attack that has a 3 second cooldown.

Two minions are trying to chase and hit the ball.

As long as you hit every time, the ball will stay out of reach and you'll get points. Get close to avoid missing and note that when the minions hit it, the ball will also move.

If the minions touch the ball, you lose points.

Play until the timer runs out.

Talk to Digory again to complete this quest step and unlock a daily quest:

Head north and start flying to the mountain edge where the steps to the floating island start to talk to Rachlae or use the teleport Popo to go to the Sky Pond. Talking to her will complete the Get Back To Your Roots quest.

[Rootstock] Down on the Farm

Talk to Rachlae to star the quest, then use the Popo next to her named Plurin to teleport to Lee's End Stead.

Tagun will have you do the intro to Sheep herding quest. Go into the field to the north and interact with a White Cloud Sheep to get it to follow you back to the pen that Tagun was standing next to. You can head all the way back to the pen unless you take a really odd path and the sheep should make it to you. Be sure to go far enough inside the pen that the sheep goes in the pen as well.

talk to Tagun to finish the quest and also unlock the daily quest:

If you are farming Lamb Bulgogi, you could stop at this point as you have the daily you need unlocked.

Head northwest to the house on the hill to talk to Filton.

Go into the field and kill two Hyenas then talk to Filton again. This will unlock the daily quest

Head northwest again to the Struthio pen and talk to Trichi.

Gather one Struthio egg from the pens then head west and talk to Tippani, she'll give you access to the Piggling Rodeo introduction

Talk to Tippani again to unlock the daily quest:

You need to head back to the Rootstock Fairgrounds. Walk back towards the Struthio pen and talk to the Popo named Tutram halfway there, to teleport back to the fairgrounds quickly.

Talk to Melsa. Be mindful to click on the [Rootstock] Down on the Farm quest if you didn't want to start the daily quest yet.

You'll get some salt and  Recipe:Grilled Pigling (Quest). It will be consumed after the quest but that's fine.

You need to be near a stove to use the recipe.

Right-click on the recipe while standing next to a stove then talk to Melsa to complete the quest.

At this point, the rootstock dailies are all available (they were technically available one quest step ago) and you got the one-time loot from the activation process.

How to Get Recipes

Melsa sells a lot of the recipes from her NPC store.

Get The Rest From Games

You get a gathering necklace out of this quest. It fives you a 5% gather time discount, which amounts to less than a second reduction. You're better off using Speedy Gather Tools. But there is probably an achievement associated with it so might as well do it.

When you have the items, right click on the Almanac to progress it.

The items required in order are:

Head back to the Rootstock Fairgrounds and talk to Millia to complete the quest.

Talk to Melsa to activate. Talk to Melsa again and confirm your acceptance then bring her one Grilled Pigling.

Talk to Digory at Digory's Farm then activate the Kick Bale game. Finish the game then talk to Digory to complete the Daily.

You can play the game multiple times but only get the daily once per day. Top rank in the mini game will get you:

Talk to Tagun at Lee's End Stead to activate the quest. Swap channels to avoid thinned out herds. Interact with a White Cloud Sheep and lead it back to the pen. Talk to Tagun to complete the quest.

Here's a cheatsheet we made two years ago. It seems to still be up to date minus the point cutoffs, maybe.