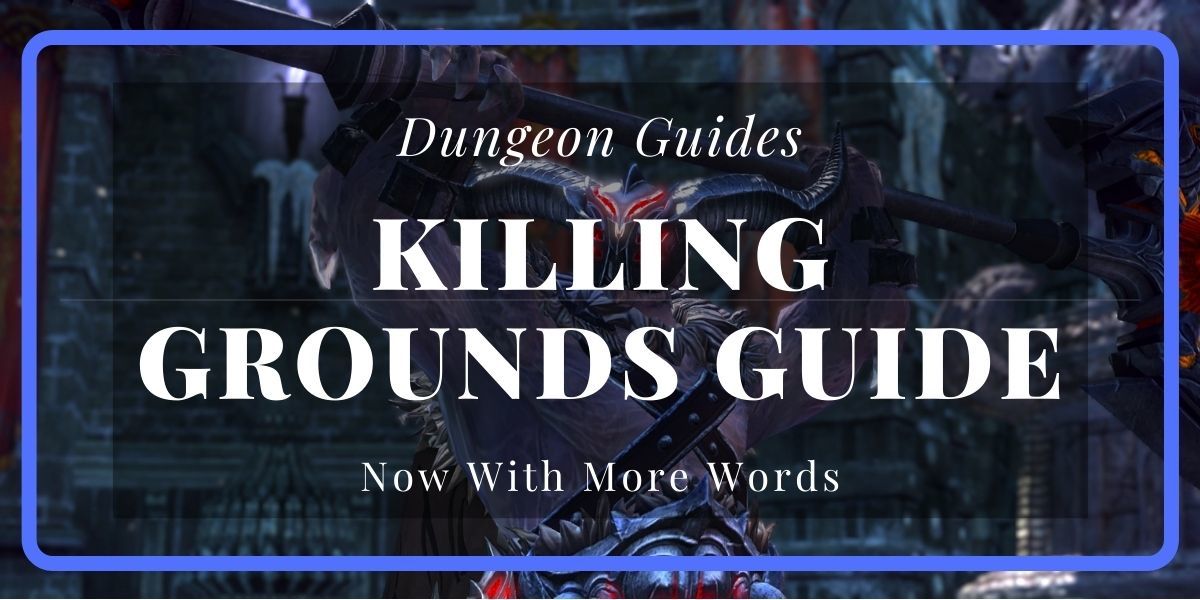 This is a guide for the TERA dungeon named Killing Grounds, normal mode. The dungeon is primarily run to farm Tyrant's Belt, used for Kaia Soul hand and footwear.

This is based entirely off the guide information from the discord "Tera Dungeon Guides" (discord link). Copied onto this site for the people who don't use discord  or who find it more convenient to use a site over a discord channel. The guide text and graphics were put together by Taldek (Taldek#7422)

Table of Contents
Basic Combos
Up, Down, Spin Around, and Slam
Down, Down, Up, Knockback spin
Down, Up, Down, Thunderstrike
Down, Up, Turn around, Cyclone
90%
Closest/Furthest debuff
Snowball Puddles
85%
Stomp mechanic
Leash into Liftoff Jump
80%
Glowing Fist aoes
70%
Increasing power
65%
First unleash
35%
Second Unleash
1%
Final Unleash
Example Videos

All of this consist of berserker auto attack animations and to save time ill call them by the direction they go.

Up, Down, Spin Around, and Slam

All 4 hits are blockable

Down, Down, Up, Knockback spin

The first hit staggers and the second hit of the spin at the end knocks you back, all blockable and shieldable.(edited)

Down, Up, Down, Thunderstrike

The thunderstrike at the end will knock you down if hit, iframe it.

Down, Up, Turn around, Cyclone

If the tank chases while the boss turns around, he will be body blocked and not move while doing cyclone.

This mechanic happens every 45 seconds and if you take 2 in a row, you will be frozen and instantly die

Rotate between healer and a mobile dps

But why not tank and healer you ask? it interacts with a different mechanic:

He will spit a giant snowball at them that will home in until it hits, creating a puddle of ice on that spot

The boss will quickly put his axe over his right shoulder and rear back and stomp, knocking everyone down. Kaia and iframe will dodge it, blocking doesnt work.
After the boss will do one of 3 different attacks, based on a glow he gets around certain parts of him
Red glow around axe: Giant thunderstrike
Blue glow around pants: Giant Cyclone
No glow at all: roll into strike on random target
When you engage the boss at 100% he will have a buff for the entire fight:

This makes him immune to stuns
The instant the boss starts stomping, he will lose this buff for 2 seconds, replaced by a buff that makes him vulnerable to stuns:

If anyone can react to the stomp fast enough, you can prevent both the stomp and the following attack after.
Here are examples of all 3 attacks, followed by stunning him in time:

Each tick of this cyclone gives a nasty bleed that stacks, 7% hp per tick per stack

No glow = roll into strike on random target

and finally, doing it proper and stunning while he is vulnerable:

This mechanic has a 45 second cd and very often lines up right after the closest/furthest debuff.

The boss will leash the furthest(?) player to him and then do a jumping attack, taking anyone still in front of him, even if you arent the leash target. The boss landing also knocks anyone near him down.

Dps and healer stack up behind him and heal/cleanse through his attacks. Dodge the 3rd rampage or the whirlwind.

Starting at 80% then every 70-80 seconds, the boss will stand straight and his right hand will glow either red or blue and he will slam it, creating donuts to dodge.Red Fist = coming from inner firstBlue fist = coming from outer first4 waves will spawn moving quickly, think AAH speed.(edited)

and some blue fist

At 70 the boss will gain this buff, increasing his damage done by 2%. This will stack every 60 seconds for the rest of the fight.

Once below 65%, the boss will pull every player to him and begin casting an unleash. This will also create a cage that will limit the amount of space you have, remember the ice puddles?
Standing in an ice puddle and every single attack he does in unleash will apply a frost stack

Reaching 10 stacks of this will freeze you solid, killing you. Can be cleansed.
Once in unleash, the boss will gain 2 buffs, mostly for show

This is merely showing he's in unleash

This gives him 20% movespeed and 30% attack speed
The boss in unleash is entirely combo based and the unleash will not end until he reaches a certain amount.
The first unleash goes like this:
3x right - left - right hits (blockable)
3x Rampages (dodge the 3rd, hurts) OR whirlwind (blockable)
Shout ( cannot prevent this damage, heal through)If he starts the combo with left hand = rampagesif he starts the combo with right hand = whirlwind.If his target dies or he changes targets, he will restart this comboHe must get 3 finishers off to exit unleash, the finishers are the 3rd rampage or the whirlwind followed by a shout.

This second clip shows what the whirlwind looks like:

During this, the giant will still spit snowballs at people with the 45 second debuff, place these out of the stack

After exiting unleash, all of the bosses cooldowns will be up similar to lumikan so prepare for everything back to back.

The second unleash will gain some new stuff added to it.
If everyone stays near the boss, he will only target the tank like the first unleash.If people are far away enough from the boss, he will instead target them or a random person with a focus target.(edited)

This means the boss will focus that player for his entire combo or until they die.
the person with this eye needs to quickly go to the tank and let the tank block for them.
it can be quite messy especially with snowballs still coming from the giant on the wall
The bosses combo will also be longer this time around.
- 3x Right - Left - Right
- 3x Rampages OR Whirlwind
- 1x Beast fury (5-6 hits and the final hit kds through block)
- Shout
In order for the boss to exit unleash, he will need to do 3 total shouts after finishing a combo.(edited)
Note how long this unleash lasts because he keeps restarting his combo:

Now it appears that if everyone is RIGHT on the bosses ass, he will still only target the tank:

Finally at 1%, the boss will go immune to damage and cast his final unleash.
This unleash will never end until he dies or you do.
He also gains a shield for 700k that you must first break through before finishing his hp of 290 mil.

This mechanic at the time of writing is bugged but its getting fixed to actually function.
Functionally this is the same as 35% unleash
These clips are from pre hotfix where the shield doesn't actually trigger (lol).

Edit for hotfixes: The final unleash will now ALWAYS trigger a focus debuff on someone after shouting.Unlike the other unleashes, the boss will start this one with a shout which applies the focus target on a random person. Anytime the combo string ends the shout will apply it again randomly.