Power Leveling to 20 in 45 Minutes 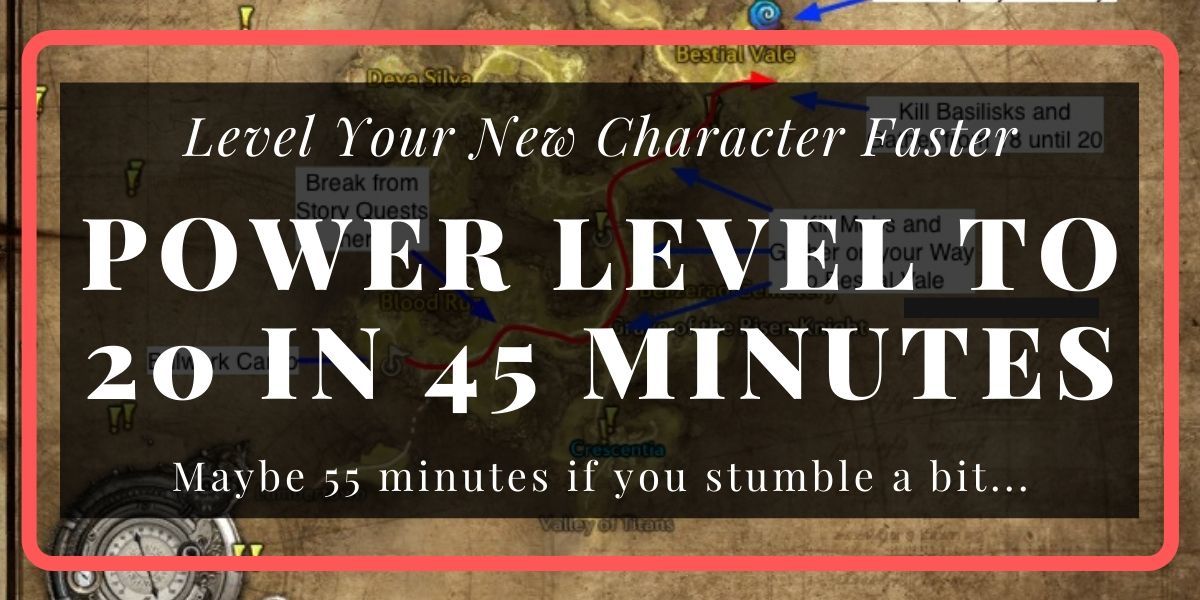 Trying to power level some alt characters for a leveling event or just want to get a new character into dungeons as fast as possible? This post is for you. This will only cover getting up to 20 and getting your gear for Bastion of Lok. The 20 to 65 path will be covered in another post.

Step 1: Get off Stepstone

This step can't be sped up very much. Here's what you can do to go a bit faster:

The biggest "gotcha" is forgetting to read Dougal's note after the sickly bears. Don't forget so you don't have to go back and do that when you realize the next step isn't activated. If you have the gold in the bank, grab a couple hundred gold and Prime Battle solutions to cover your inventory expansions and give you MP. Or if you have elite, remember to use your Everful Nostrum. Grab some consumables if you wanna try killing the argon bosses before they can stun you. 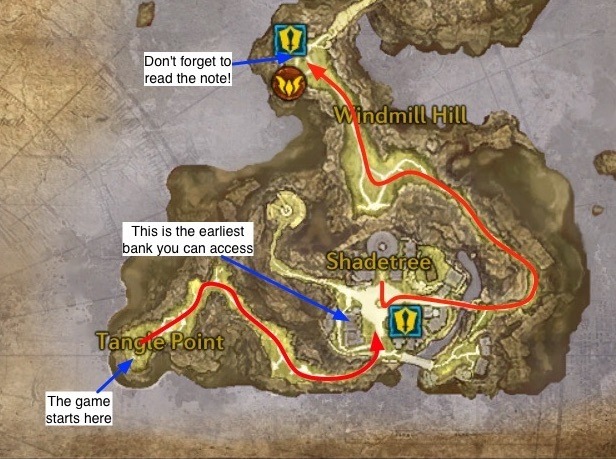 Step 2: Get out of Velika

If you don't have gold and primes from your bank, ask around in Velika for anyone to spot you 300 gold and some Primes. Anyone at end game should be able to help you easily. Expand your inventory with Getty and toss the leveling battle solutions. Before you head to the headquarters, go to the crystal merchant in the back alley path and buy your weapon and armor crystals to make fighting after level 20 a bit faster. 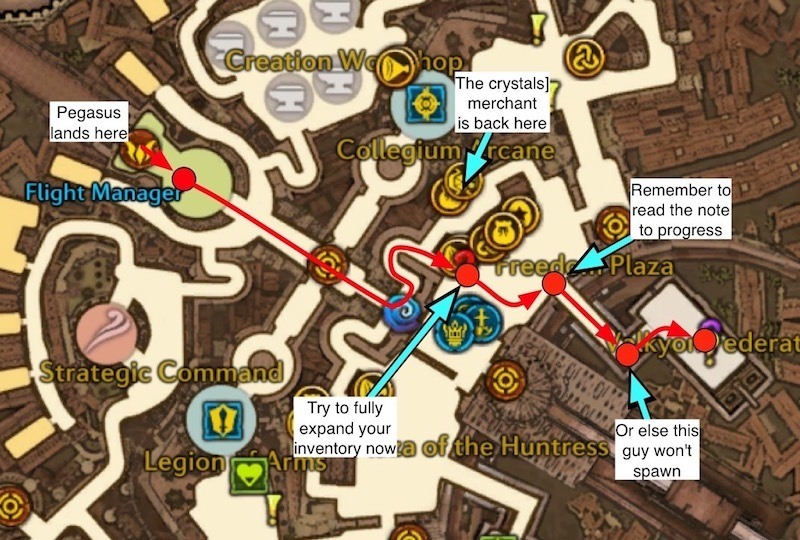 Go into the command headquarters. Remember to talk to Uriela at the entrance twice, interact with the note you get, and talk to the NPC that spawns at the end of the hallway. When you talk to Samael, pick to go to Uriela. This will give you the shortest path to teleporting out of Velika. She's the NPC you talked to at the entrance to the building. Dougal makes you go back to the teleport station and Getty will teleport you to Lumbertown. Uriela will take you directly to the bulwark camp.

Note: If you want the last part of this blitz to go a bit faster, try to get some Pickled Veridia Root food either off the broker, from your bank, or ask in Velika. It'll reduce your gather times by 20%, down to 12s to 10s, depending on whether you have the right tool activated. 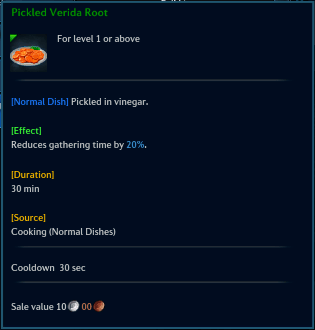 All three choices will eventually lead you to the Bulwark camp. Uriela is the fastest way to get here. Do the first few quests (kill mobs, gather flowers, give them to the soldiers, get a weapon and enchant it, kill more mobs) until you get to the Amani at the cart and get your chest armor. Remember to swap out your gear and put on your low level crystals. You won't be able to use your other crystals until you have level 20 gear. You also will have a full set of temporary gather tools. Add them to another skill bar (press Alt+2 to swap to a blank one and add all three tools to your 1,2,3 buttons). 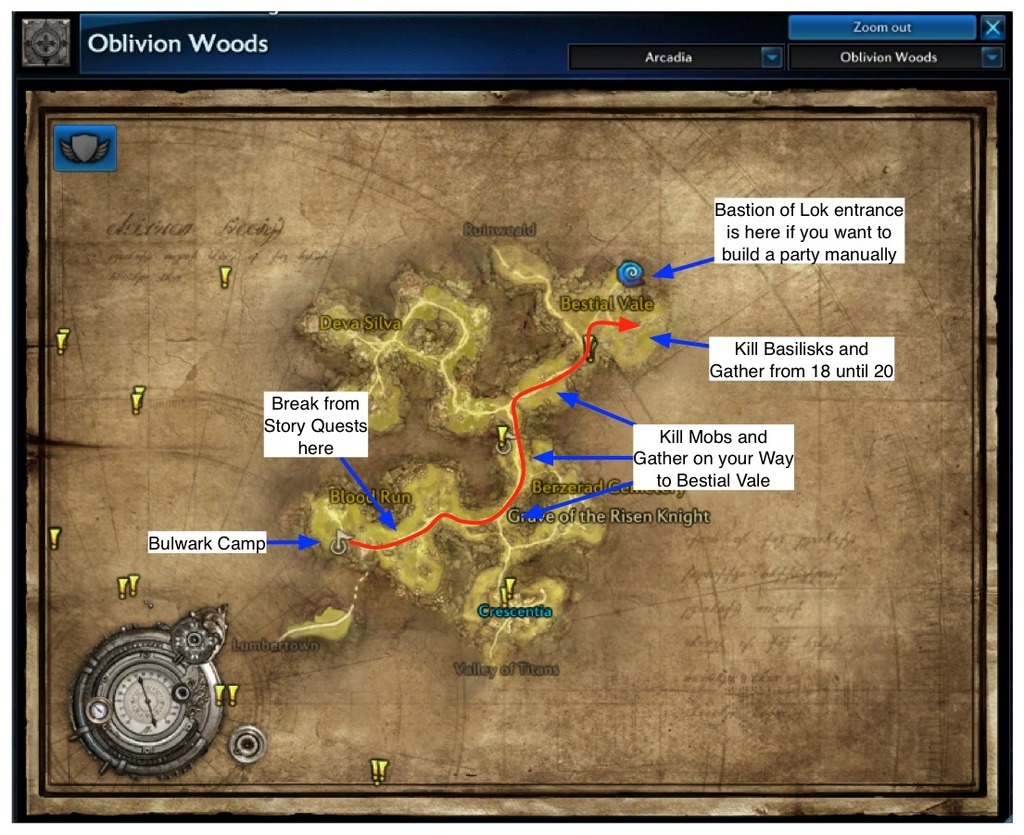 Now, gather every node you run into and trash pull mobs as you come across clusters of them. You want to gradually make your way up to the Basilisk Craig. Once you're around level 18, start working on the Basilisks and continue gathering. Swap channels as needed to get fresh nodes.

While gathering, activate the tool that matches the node type. Rocks use a pick (1 below), plants use the Sickle (3 below), and essence node use the Extractor (2 below) although I don't remember seeing any essence nodes in the area. If you managed to get Picked Verida Root food, activate it. Keep in mind that you will get interrupted if you are attacked while gathering. Consider killing any nearby mobs that might bother you before you start a node. Up until level 20, gather nodes will give you 8% to 9% of the XP required for each level!

Every class can handle a dozen mobs grouped together. The ideal process involves going around all the mobs in a ~30m radius so they aggro on you and follow you into a cluster. Then proceed to use your skills besides auto-attack, chaining them properly to get faster skill casts, and moving around or evading as needed before repeating. Remember to use your Prime Battle Solution to avoid running out of MP while you use all your skills.

You can theoretically fight the Basilisks as soon as you leave Velika, but it will be painfully slow to kill them, even with a lot of combat buffs on. It's easier to level using gathering and regular mobs until around level 18. At this point, even with the level 13 weapon, you should be able to kill the Basilisks in about 10 to 15 seconds each. While you could keep gathering to finish leveling, you'll need your level 20 equipment to get into Bastion of Lok. The Basilisks will drop the gear you need. You won't be able to equip it until level 20 but that's okay.

Step 5: Check Your Gear and Glyphs then Get into the BoL Queue

If all went well, you should be hitting level 20 around the 45 minute mark for your Character. If you killed enough basilisks, you'll have enough level 20 gear to meet the item level requirement (51) for Bastion of Lok. If not, kill a few more Basilisks until the gear drops.

Remember that you can use the level 20 (XX) tokens to trade for gear if you are missing a piece you need. You'll get them as random drops as well as from the BAM Vanguard Mission rewards.

Once you hit level 20, you will unlock skill glyphs. If this is an alt character than you should already know what glyphs are. But if not, hit 'k' to bring up your skills and you'll see little clickable icons next to your skills. For leveling, you won't have enough points to activate everything and you also won't have all your skill glyphs unlocked. This makes most class glyph pages somewhat useless until you finish leveling. Here's how to pick which glyphs to use:

Continue leveling from 20 to 65 with this reference post on all the Dungeons and Solo Vanguards you'll be running.