TERA Guild Quests Changes after Patch 90 - How To TERA 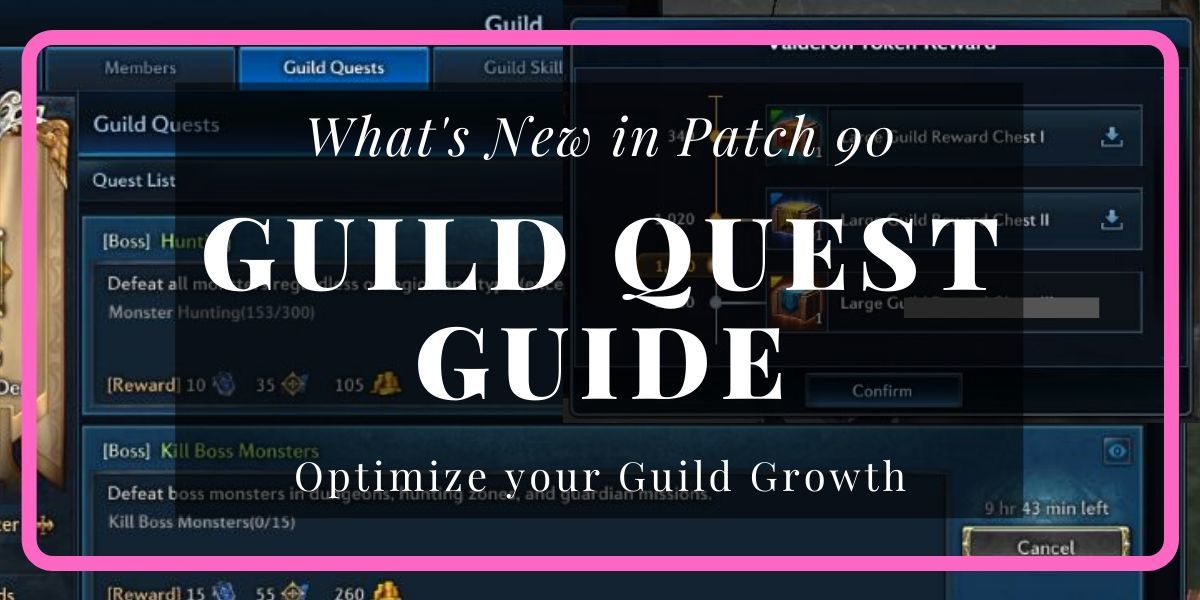 Patch 90 changed how the guild quest system works in TERA. This article goes over the mechanics of the new system. The patch notes can be found here on a forum post from EnMasse.

Why Bother With Guild Quests?

Guilds in TERA are basically an enhanced friends list with some added mechanics and minor buffs. A guide specifically for guild stuff is on the to-do list so this won't go into too much detail regarding how the guild stuff works. The important thing is doing guild quests is one of two ways to get guild XP. Guild XP will level the guild and get you Guild Points that you can use on Guild Skills. Guild Skills will buff guild members a little bit all the time as well as open up skills that can be useful for PvP. Guild quests also gave the guild limited funds that could be distributed to the guild. This amount was never scaled for the gold inflation so it's almost negligible.

With patch 90, there is an added incentive to work on guild quests: individual character reward boxes. The specifics of the system will be detailed below.

In the old system, you got could have up to 5 guild quests active or completed. Quests came in three tiers: small, medium, and large. Your options were limited by the size of your guild so small guilds (less than 40 accounts) could only pick smalls while large guilds (80 or more accounts) could choose small, medium, or large quests. Only 3 could be active at the same time and they varied from clearing specific dungeons, gathering specific resource nodes, winning certain battlegrounds, or participating in the open world Rally BAMs. You got 12 hours to finish a quest from the time you start it and any quests not finished by 8 AM Eastern Daylight / noon UTC the next day would count towards the next day's 5 daily limit. Anyone who participated in an open guild quest would get contribution points, which were used to determine how much of the guild funds distribution you received when funds are distributed*. Only guild members who had the appropriate authority settings could start, claim complete, and cancel a guild quest.

* Although it's not possible to test the old contribution math, the current math for fund distribution is:

What Changed in Patch 90

The guild quest system changed in a couple of ways with patch 90. The range of options for quest you got was simplified, the time requirements changed a bit, everyone was given start and claim authority after they have been around for at least one token reset at Sunday Midnight, UTC (Sunday 8 PM Eastern Daylight Savings, midnight UTC). The quest limit was changed and individual rewards were added although they are gated on the shared guild token progress for the week.

Based on a commenter's notes regarding small size guild quest data, it looks like the small, medium, and large guild sizes all share the same values. Leave a note if you have info on a medium guild so this can be confirmed.

What quests you can choose

There are now 5 quest types to choose from and their goals were greatly simplified. The quest types are:

The amount of things you have to do for these quest will vary depending on your guild size. You can no longer pick small, medium, or large. You get 12 hours to clear the quests and they all end at 8 AM eastern time daylight / noon UTC regardless of their completion progress or if they are unclaimed.

Who can activate quests

Everyone who has been in a guild and experienced at least one Valderon token reset at Sunday Midnight, UTC (Sunday 8 PM Eastern daylight / midnight GMT) can now start and claim a completed quest. Authority from the appropriate rank setting is required to cancel a quest.

Limits on how many quests you can do

You can have all five quests active if you want. When a quest is completed and claimed, you can restart the quest immediately. You will not be able to activate more quests once you max out on potential Valderon tokens for the week. However, you can cancel a quest in progress without any penalty. This can be useful if you want to free up some potential tokens to pick a different quest if you are at the weekly limit. If you are 30 points away from max and you have a 30 point quest open, then you won't be able to activate any others. The token count resets at Sunday Midnight, UTC (Sunday 8 PM Eastern Daylight).

What you can get

The Valderon Token system was added with this patch. The old guild funds and guild points system are still in place. With the token system, each character in the guild that has been present for a week can claim individual rewards as the guild completes enough quests and builds up enough tokens. 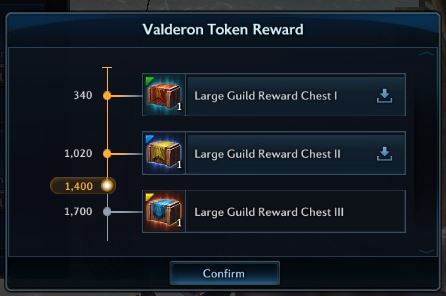 Large Guild token requirements for Chest I, II, and III. The "Confirm" button is actually the "close" button. To claim a box, click on the download icon to the right of each reward tier. 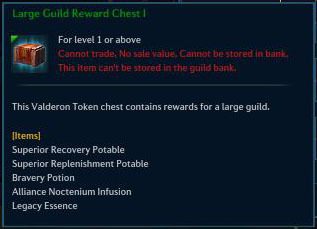 Large Guild Reward Chest I. You get rubies and one of the following item types: 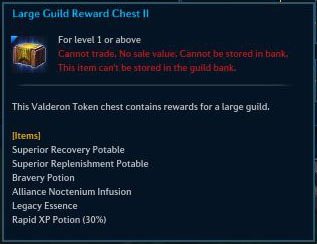 Large Guild Reward Chest II. Same base loot table as Chest I with the following added: 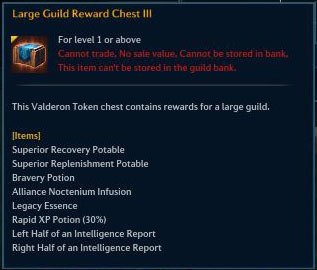 How the Claimable Box System Works

Each quest completed will add tokens to the guild total. Everyone in the guild shares the same token count. When the token count reaches each of three different point requirements, individual rewards are unlocked for claim. You can claim all three rewards in any order once the token threshold is reached. You don't have to contribute to guild quests to claim rewards but you do have to be in the guild for a week before you can claim rewards. The boxes work like loot boxes - you get a fixed reward and then you can pick from one of four boxes to get an additional reward from the item loot box. The loot tables appear to be the same between all guild sizes although the box item id's and names are unique for different guild sizes. You can also claim the items on every character you have in the guild that has passed the "been present for one token reset" requirement.

Here's the quest info for a large guild. Waiting on specifics for medium and small guilds.

How to Min-Max The New System For Optimal Guild Leveling

Since you can no longer claim quests once the tokens are maxed out each week, doing only boss monster quests will be optimal for guild XP grinding. You'll be able to do 113 turn-ins before you hit 1700 Valderon tokens and you'll get 6215 guild XP.  This would take 566 clears of any three boss dungeon to complete. This is more than you would have been able to make in XP each week under the old guild quest system. If you fish your way to max tokens then you'll get 2550 guild XP each week. But it will take considerably less focus than clearing the same amount of dungeons.

With the boss hunting quest, bosses like all the Ace Dungeon bosses,  Banyaka in Ghilliglade, and Petrax in Pit of Petrax will all count as bosses. The Echoes bosses will probably also count but it takes longer to run than the other solo instances. This can be useful if you don't get enough dungeon runs between your guild members to max out on boss hunting quests.