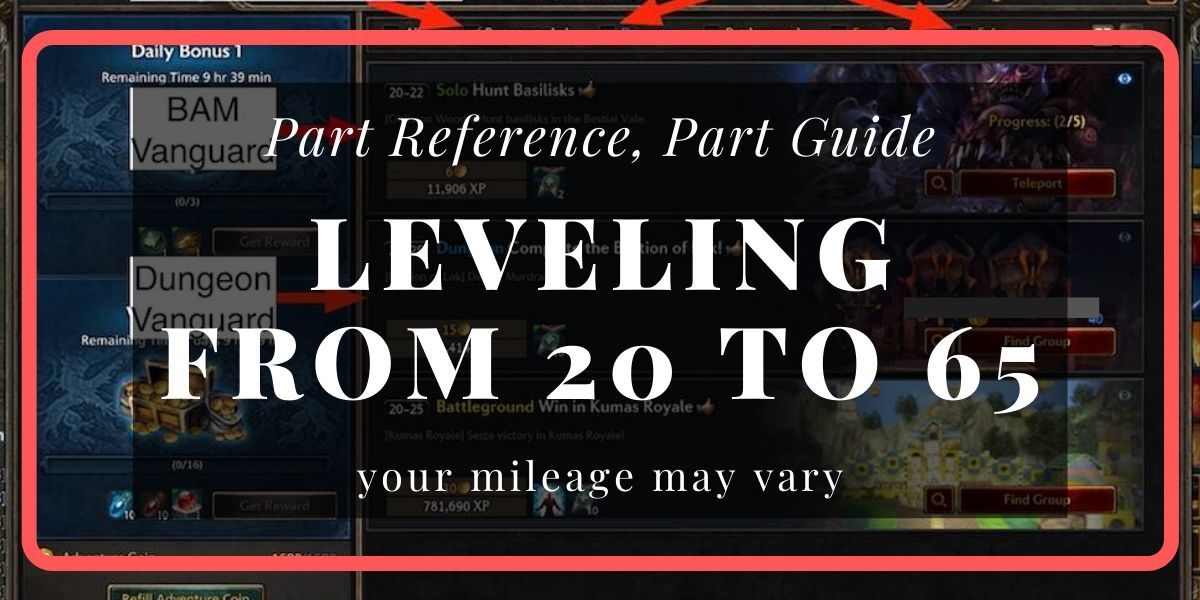 This posts will cover all the Vanguard Requests from level 20 to 65 for the Dungeons and Solo BAM hunts.

There's an new guide post for leveling from 1 to 70 quickly. This still works for the 20 to 65 portion but the new guide will help speed up 65 to 70. The Fastest Way to Level to 70 and Get Your League of Levelers Loot

Doing dungeons back-to-back is the fastest way to level. Filling in the downtime with BAM Vanguards will make sure you keep moving forward towards 65. 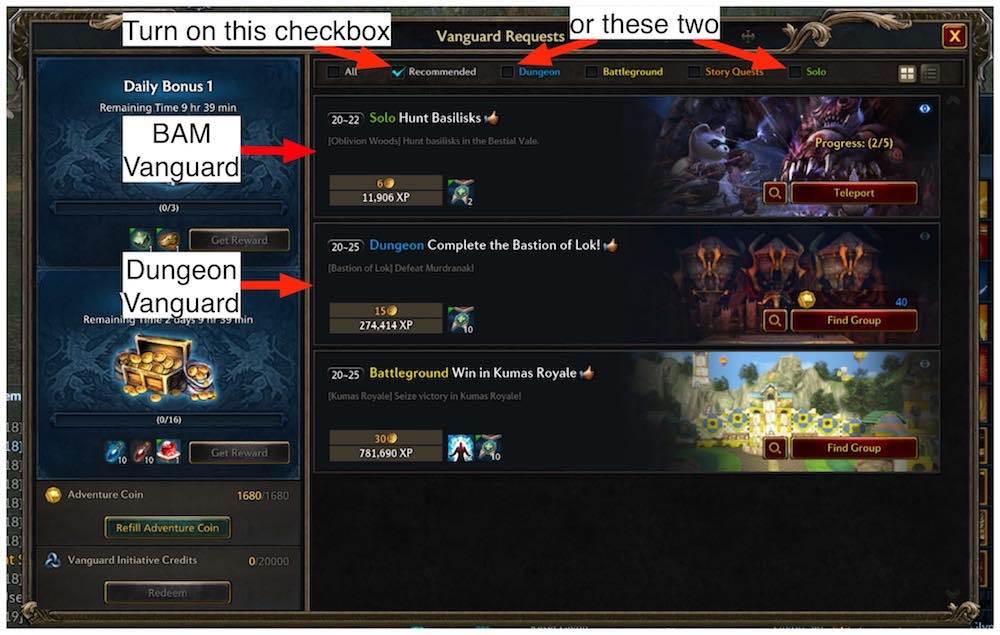 Make sure you have Recommended or Dungeons and Solo check-marked.

The dungeon vanguard request have two requirements: be the right level and have a high enough item level. Once you out-level a vanguard request, it won't show up although you can still run the dungeon if you want. Your XP rewards from killing mobs and bosses will be reduced. Your item level is based on a weighted average of your gear. You can see your item level on your HP and MP bar and on your character profile.

BAM Vanguards are important because they will quickly get you in front of BAMs that you can farm for XP. In theory, you could find a BAM appropriate for any level to get gear and XP from, but in practice it's easier to just use the ones they point you towards. Not all BAMs are properly scaled for the level you're going to be fighting at. They also sometimes drop gear that is a bit higher than the range you'd be fighting them at. In these case, it's recommended you fight them for a bit longer so you can use the gear they dropped before moving on. If you are dungeoning at the same time then this is less of an issue.

The boxes below will cover the item level requirements for dungeons and what level gear the dungeons and BAMs will drop. They also cover the locations for the BAMs in case you need to pick up some gear at a specific level that you missed going through a dungeon.

Dungeon: Complete the Bastion of Lok!

Notice how the gear dropped is level 26 but the level range for these BAMs is 22 to 25? If you're not getting a Bastion of Lok queue, it might be beneficial to keep beating up the Nagas and Kumas here until you hit level 26 so you can swap into your new gear. The Fimbrilisks will also drop level 26 gear.

The Giants and Vulcans in the Labyrinth are very low density. Unless there's a side room that was missed, there are only 2 of them between 2 rooms, per channel. You'll have to channel swap to get the next set and repeat until you loop back around. The first set should have respawned by the time you're on the first channel.

Important: Be careful not to accidentally attack the level 65 Vulcan BAMs here! They will one-shot you while leveling. There is level 65+ story quest stuff in this area. Luckily they have a very tight aggro range so you should be fine as long as you don't poke them.

Also, note that you get gear that's higher than the level range for these BAMs. Consider getting to 44 now before going on to the Onyx Hydraths so you can swap up to the new gear beforehand. The XP from both Hydraths and Basilisks at this range feels slow. Being able to kill them faster will help a bit.

Dungeon: Akasha's Hideout or something

Skip this one. Run Golden Labyrinth. The bosses and mobs are balanced weird and you'll get stun-locked a lot so it's not a fun time.

Solo: Clean Up the Hatchery

Try to queue into Ebon Tower at this point instead of continuing on BAMs. The Orisks and Ruins Guardians are stronger than the gear you'll be using leading up to them. If you're going to be stuck on BAMs, try to get to 60 on Sandlurker Lizards and acquire level 60 gear from lower mobs before fighting the Orisks. They turn a lot and will one shot with their short-range circle AoE attack.

If you can find a level 65 friend or a friendly random stranger to run Ebon Tower with you, you can shorten each run to about 6 minutes. Depending on your level difference, you may not get XP from the mobs and some of the bosses. This is mostly an issue at level 58 and less so at 59 and 60.

If you are running Ebon Tower with other levelers, it can be helpful to pick up the level 62 gear from the BAMs around Highwatch to make the bosses go faster. Much faster. Ebon Tower will only give you gear up to level 60.

Note that there were a few dungeons skipped. Kelsaik's Nest, Balder's Temple, Argon Corpus, and Manaya's Core. They come up in the story quests but don't all have associated Vanguard Requests. They also don't give very much XP for the effort so you might want to return to these after you finish leveling as part your story quest adventure.

I Didn't Get A Weapon Drop. What Do I Do?

You can get each of the leveling weapons through a box purchased in Highwatch. This requires that you have one character that has finished leveling and has 350 vanguard reward credits available. Use the "Redeem" button in the Vanguard Requests to teleport in front of an NPC named Sionne. She sells two equipment boxes named the "Seren's Weapon Chest" and the "Dagon's Weapon Chest". The Seren's chest will give you a level 12 weapon, and a box for level 20. This repeats up to level the level 64 weapon. The Dagon's Weapon chest covers weapons for level 58 to 64 but it also costs 2500 vangurd credits and is moot since the Seren one will give you the same weapons. If you're leveling an alt, consider grabbing a Seren's box from the start so you don't have to waste time farming a higher level weapon as you are power leveling.

This kind of depends on if you're playing PC vs console, since console still has the older progression steps.

For PC, follow the purple quest markers to get Kaia gear, choose to skip Apex and get everything if you want, then keep following the quests until you hit 66. Add in queuing for Gossamer Vault while you keep questing until you hit 68. Then do the daily solo quests on Exodor that are worth 1.68B XP until you are 70. And queue Verrak Fortress (aka Aqalath Quarantine). This updated guide will walk through the steps:  The Fastest Way to Level to 70 and Get Your League of Levelers Loot

For console, I have no idea what your current patch has you do. It might include going through Pre-Apex, Apex, and then onto the 65+ quest line leading to Exodor, if you have Exodor content. There's a big list of stuff posted here that might be mostly still relevant for console.

With patch 92, the quest line progression at 65 got rearranged a bit. The Pre-Apex stuff that mostly introduced you to the solo content and geared you up got moved to level 68 and you now go directly into the Apex Banquet quest line. So jump to the Apex quest guide for now and then you can use the pre-apex quest as a reference for what's available.