How to Get All Your Skill Glyphs - How To TERA

How to Get All Your Skill Glyphs 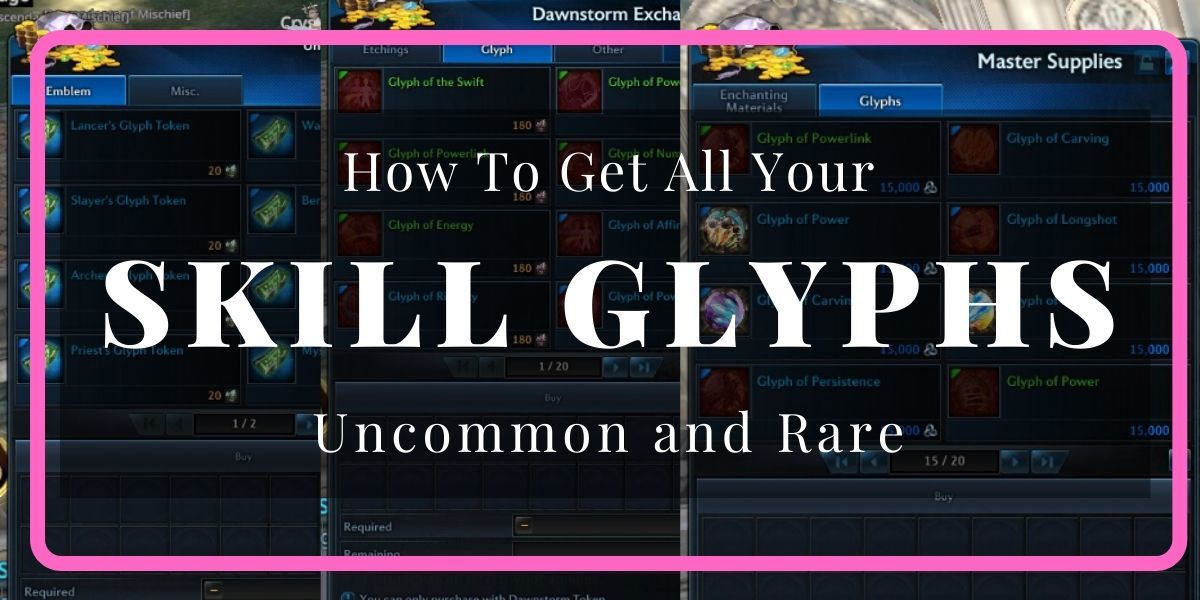 If you started the Apex Quest line during or after Patch 92, you're in luck! You get all of your skill glyphs (except for the Apex and level 70 ones) during the Velika Banquet solo instance. Yep, no grinding to get your rare glyphs. Wait long enough and they simplify everything and hand it to you.

If you completed Apex before Patch 92, then sadly there's no known way to get access to the glyph token that is given during the Banquet that has every glyph for 1 token. You'll have to use the guidance in this post to farm your missing glyphs.

You may have noticed that when you hit level 65, you can't quite copy the glyph builds that you see in the guides for your class. While leveling, you got all your skill glyphs and their upgrades for free, automatically as you hit the appropriate level numbers.  Once you hit 65 (and possibly as early as 58, I forget exactly), you'll have the potential to have better glyphs but you'll have to acquire them first as consumable items. This post will show you the different ways you can get all your glyphs, and even selectively get the ones you want while ignoring the less useful ones.

Many glyphs come in different tiers. The higher tier versions of the same glyph can have a lower glyph point cost to activate or a higher effect value, or both. You can check out all of the glyphs on essential mana on their glyph calculator.

As of patch 86, to acquire the glyphs you don't get automatically, you'll need a combination of some token shops, random glyph chests, and one from hitting level 70.

Note: However, you will get plenty of random Glyph Boxes  as a reward for completing 65+ level  story quests and  some dungeon quests.

It` s advised to save tokens before you acquire few glyphs from these boxes, as it will save you decent amount of vanguard tokens in the near future.  (These quests don`t take much time to complete and you will have to do them regardless, since they reward you with Gear Enchanting scrolls as well).

Glyph tokens will let you direct buy your uncommon glyphs. You get a few glyph tokens while you are collecting your new gear upon reaching level 65. You'll get some more along the course of the pre-apex quest and you can get them from 2 sources outside of the quest line.

Sionne can be found in Highwatch where you teleport when you use the "Redeem" button. You use your vanguard initiative credits as currency and the class glyph tokens cost 300 credits each. 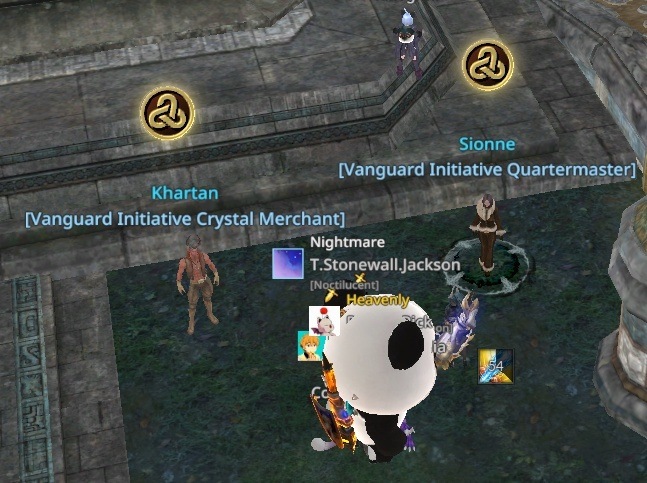 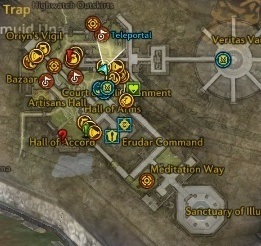 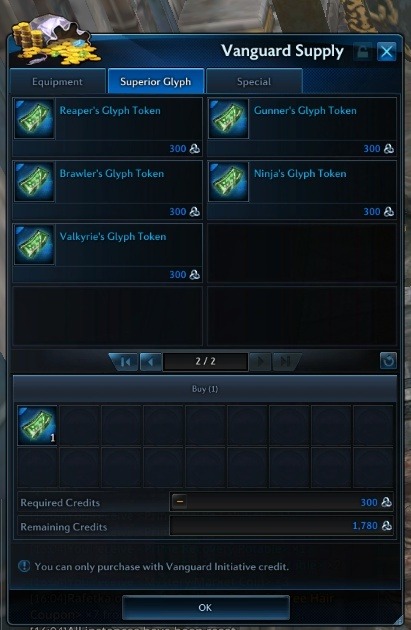 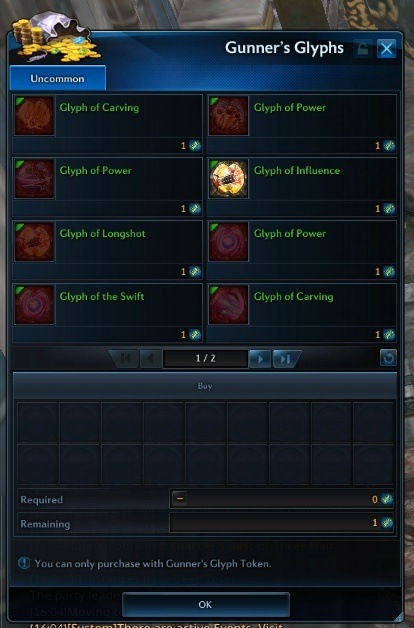 The vanguards for the low tier BAMs on IoD will give you 12 Underdawn Tokens. You need 20 to purchase a Class Glyph Token. These are the same tokens sold by Sionne in Highwatch. Considering the vanguard only awards you 25 Vanguard Initiative Credits and you need 300 to get a token, it's easier to do multiple IoD vanguards for Class Glyph Tokens then use Vanguard Initiative Credits. 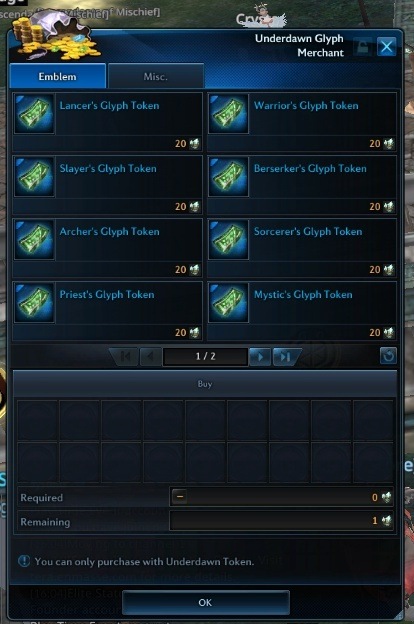 To get the rare glyphs, you'll need Plunder Boxes to try to get them by chance, or tokens and credits to direct buy them. Plunder Boxes will come from some story quests but it's easier to get them in large quantities from Dawnfall Tokens. Plunder boxes will give you uncommon and rare glyphs at random, but they will always be for your class. 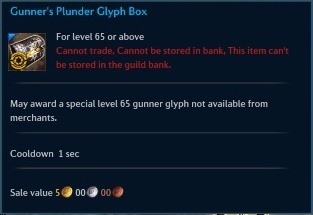 The Vanguard for the mid-tier IoD BAMs will give you 12 Dawnfall tokens. The Plunder boxes cost 20 tokens each. 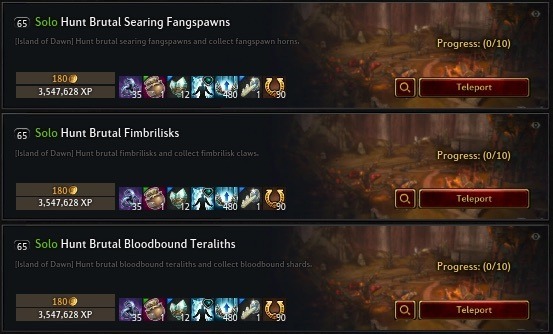 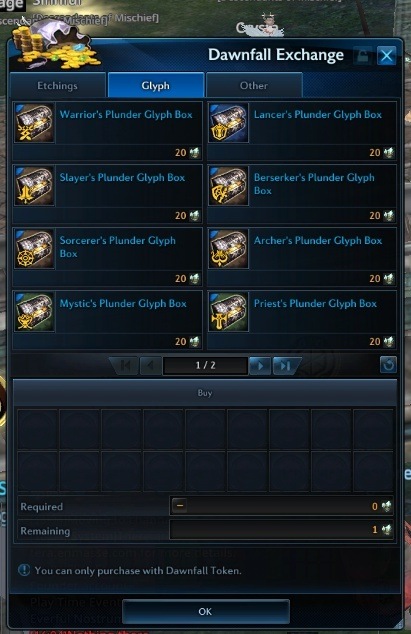 The final method for getting the uncommon and rare glyphs you are missing, besides the level 70 glyph, is through direct purchase. There are three ways to direct purchase glyphs. The first is from the Dawnstorm Token shop, and the second is from Mia in Velika, using Guardian Legion Credits. The third was recently added in NA through Banyakas Coins, obtained at random from Ghillieglade.

The vanguard request related to the three high tier BAMs on IoD will give you 12 Dawnstorm tokens. You can direct buy any uncommon or rare glyph for any class this way. Both uncommon and rare glyphs cost 180 Dawnstorm tokens. This is a little bit steep but if you farm the BAMs during double vanguard item reward weeks, it doesn't take too long. 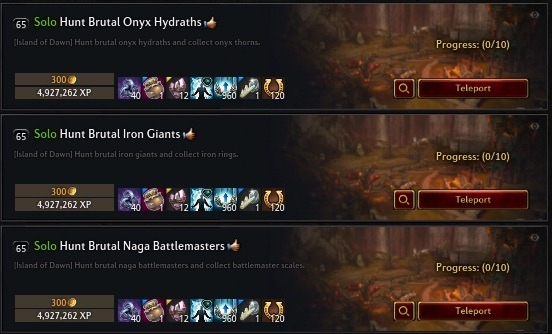 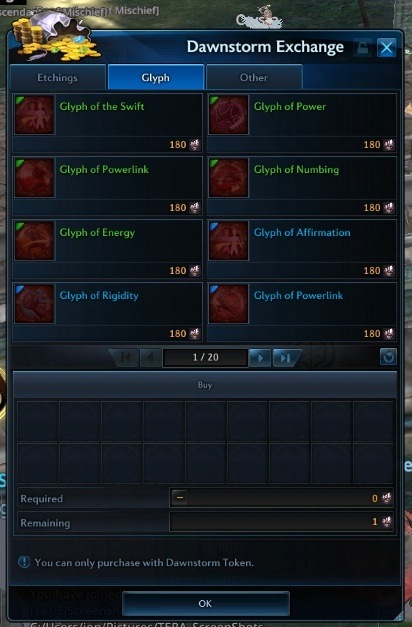 The other direct buy route is from Mia, and NPC in Velika near the entrance to the command room. There used to be 3 NPCs here that you would unlock at different item levels but they were consolidated into one. It's the same shop as the Dawnstorm Token exchange and each glyph costs 15,000 Guardian Legion Credits. 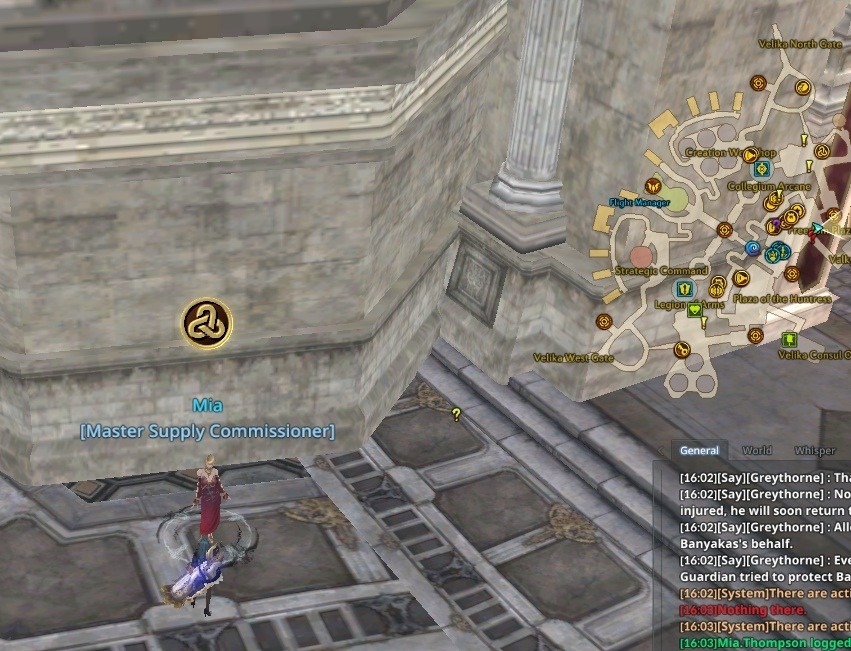 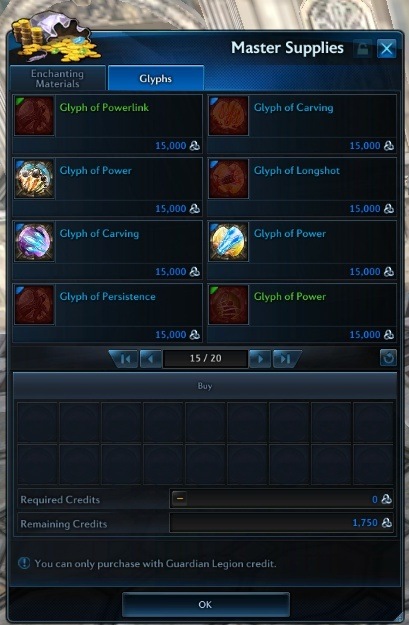 Added in patch 90, Banyakas Coins open a token shop that you can use to direct purchase uncommon and rare glyphs.  Uncommon glyphs cost 5 coins and Rare glyphs cost 10 coins. It's not yet clear what the drop rate for the coins is set to. If Ghillieglade has a double drop event, it's a good time to farm these. There's one important caveat - the tokens are non bankable. This makes the coins a bit tricky to use as a method for getting glyphs.

You get 250 credits for each Guardian Mission box. So however long it takes you to do one times 60 is what it would take. You'd also have 60 Guardian Legion Jewel Boxes and 900 item XP. Don't forget to consider down time between missions in your consideration.

Personally I can get through 150 BAMs faster than I can do 60 Guardian Legion rewards so I would go that route. And if you wait for a double vanguard item reward week, you'll be done in half the time.

Once the Banyaka Coin drop rate is determined, it can be weighed in to the opportunity cost to farm them vs Dawnstorm Tokens and guardian legion credits.