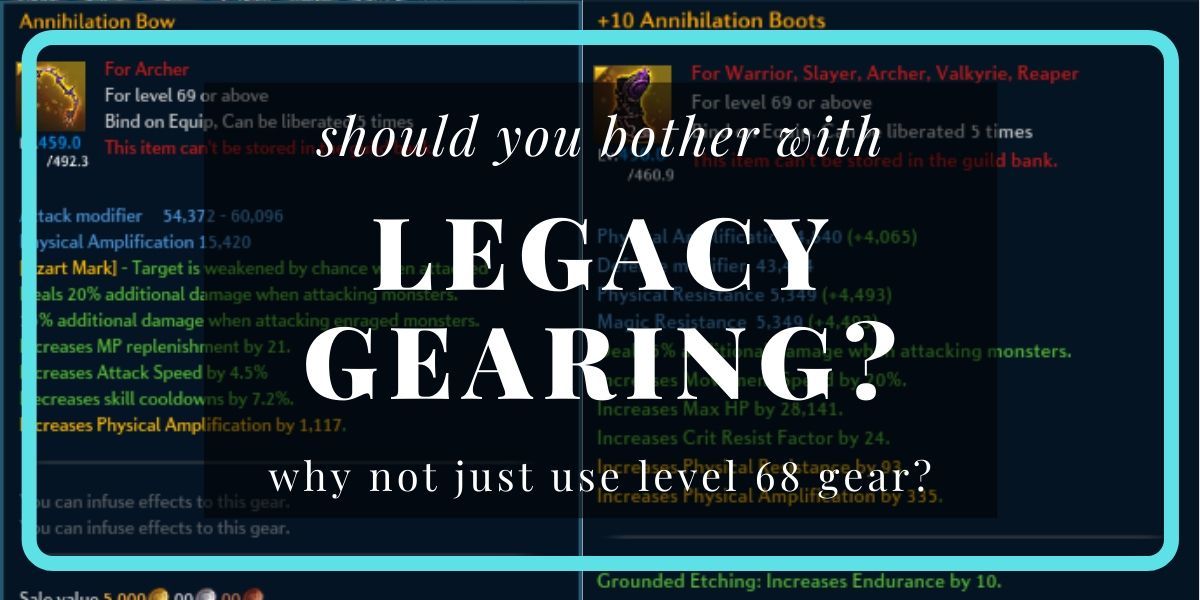 With patch 92 you are forced to use the new gear unless you have legacy gear left over on characters that hit 65 before patch 92. New Exodor gear was introduced called Exodor Scout to cover the gap from level 65 to 68 and it is item level equivalent to Frostmetal+0 to HO+0 when fully enchanted. If you have legacy gear, it is relatively "cheap" to enchant up to HO+0, Entropy jewelry, Stormcry belt, and Powerful Goddess Brooch. You should do this if you have the gold on hand and don't yet have the weapon and armor feedstock to enchant new gear. New gear is much cheaper now with the increased drops from more dungeons so the cost of getting a "nice" set is much cheaper than prior to patch 92.

HO materials for the weapon, chest, hand, and footwear are no longer available except for Supreme metal, and neither is item XP. You may want to try enchanting HO gear to reduce the cost of converting Annihilation / Dark Light gear into Mythic, although even HO+0 gear will reduce the costs.

Recently hit level 65, or are you already level 68? Trying to decide if you should equip new gear right away? Or should you keep upgrading old gear? This post will cover the pros and cons from the perspective of a casual player. Keep in mind if you ask this question to someone who is no-life'ing end game content, their answer comes with caveats based on their playstyle and preferences. Running Corrupted Skynest, Forbidden Arena, and Akalath Quarantine whenever you have adventure coins and then box hunting on Exodor the rest of the time is not the way everyone will play the game.

Short answer - depends on what you want to do. Racing to 68 to swap to new gear might be reasonable if you have a group to work with, or you are already comfortable with your class. If you are new to the game or don't have ppl to group with regularly, I'd recommend you play the game as you normally would and keep upgrading your existing gear while you build up your gold. More on that in a moment.

Why swap to new gear?

Pros and cons. The gear change was "motivated" by a desire to make "gearing easier." How was this achieved? Crystals were removed from the weapon and armor – the effects were mostly baked into the equipment. Directional damage differences were removed so you can attack from any direction with the same damage. Note that crit calculations still depend on direction. And you only use one resource and gold to enchant your gear. The gear is also tradeable (except for Eternal gold gear) so you can get everything off the broker. Sound great, right? There are caveats. You have to be 68 to use the first 2 tiers of gear, 69 for the third and fourth tier. You can only get the enchant materials from farming CS, FA, AQ and boss boxes from specific mobs on Exodor. You are locked into each tier for enchants - you can't upgrade from tier 1 to tier 2 or tier 2 to tier 3. And the gear comes in two types - magical and physical, so it's still possible to "mess up" your build, and you can't fix it without restarting your gear. Oh, and the chance of success for enchants is not given and does not increase with each failure. From +6 and higher there's a chance your gear will break, requiring a separate material to repair before you can try to enchant again. From +10 and higher there's a chance your gear will downgrade, unless you are using Eternal Gold gear. One important tradeoff if you are experienced with legacy gearing rolls is that you only get one cooldown reduction line instead of optionally running with 2x. So Warrior, Lancer, Brawler, Slayer, and Sorcerer will have a different feel due to the change in cooldowns.

A Preview of Exodor Box Hunting

The motivation for the change sounded nice, but the way the implementation worked out, kinda sucks. This is a throw back to the gearing system prior to the revamp that gave us Guaridan/Twistshard/Frostmetal/Stormcry/Heroic Oath, and like the PvP gear system. If you want to chase big damage numbers and like grinding all the newest content, then the new gear is excellent. But the new gear enchants with low odds of success (and odds of backward progress past +10) and you get no feedback on progress (likely because there is no steady progress). But you can also pay to win when the loot boxes for materials are available. Some people swiped hard on day one to get to +15 gold gear.

Getting New Gear off the Broker

You can buy new gear off the broker. The pricing will differ depending on what class you are buying for as there is more and less demand for different pieces as magical and physical. For example, only Gunner needs magical heavy armor since Berserker, Lancer, and Brawler are physical, so Gunner pieces are a bit cheaper as there's more pieces available at random. As of the time of writing, for NA / Velika, pricing was roughly:

If you aren't farming Exodor boss boxes or dungeons, you won't be able to enchant the new gear very easily. You can pay people to do enchants for you, but it requires a lot of gold. Like millions to cover materials and liberation scrolls. Old gear enchants and upgrades are a lot cheaper now, up to Stormcry +7. At 7/7/7/7 on your main gear, you'll be in the item level 454 range, which lets you do most of the content in the game. And if you eventually start working on new gear, you can use Heroic Oath tier old gear as one of the ingredients to make Mythic gear. You don't *have* to use HO gear, but it's an option. The gold costs on plates are also relatively cheap compared to before, and you can get metamorphic emblems easily as well if you need them for materials.

Basically, nothing is stopping you from using old gear and continuing to play as usual. You can still achieve the item level needed for all current content. You can progress with gearing with easily available materials. And the elitism that existed with pre-revamp gear (pre guardian/twist/frost/storm/heroic) hasn't come up. No one is going to kick you for using old equipment. At least not that I've seen so far.

If you want to get to 68 quickly, you can try running Catacombs with your available adventure coins and then hunting level 65+ mobs to try to get Caimen portals to spawn for XP.

The usual farming location for this is killing basilisks in Sienna Canyon (southern portion of Val Elenium, south of Allemantheia). This seems to be because they are easy to clump together (close enough to each other, wide enough aggro range?). Ideally, you have a full party to work with. If you are just starting out and aren't comfortable with your class, this isn't recommended. More on farming Caimens in another post sometime later.

Regarding dungeons, although Macellarius Catacombs can get you a decent chunk of XP, you may also be running it undergeared. You could get stuck with two stumps for party members, making Catacombs into a trap if you can't manage to do it solo. So maybe Catacombs isn't a great idea either... It's really better to gear up a bit more in legacy gear and try run harder dungeons. RK-9 at item level 442 is a good first spam target that most people know and will usually go quickly. After that, use Gossamer Vault at item level 453. This is roughly Stormcry +5/5/5/5. It's a big more expensive on coins but with only 2 bosses and high popularity, the odds that you'll have a smooth run are higher than the other options, and the XP gain is excellent.

This might seem odd for anyone who is focused on enchanting new gear. Depending on your current level or how easily you can get to 68. If you have 45k and can jump into blue gear on a whim, you can get into everything up to and including Gossamer Vault. This lets you get materials up to HO+1. You can also still farm item XP as needed because it isn't applied until you accept a completed vanguard. Finish a vanguard request in blue gear, swap, and receive it in legacy gear.

Does New Gear Give You More Damage?

Maybe this is what it comes down to for most players. The answer - yes, and no. Roughly speaking, the old and new gear track each other up to a point, after which Gold enchanted gear will outpace legacy gear. Green + 0 is roughly equivalent to something around high-level Frostmetal or Stormcry+0. Blue + 0 is roughly mid to high Stormcry, and Gold + 0 is above Heroic Oath + 0, at least in item level. 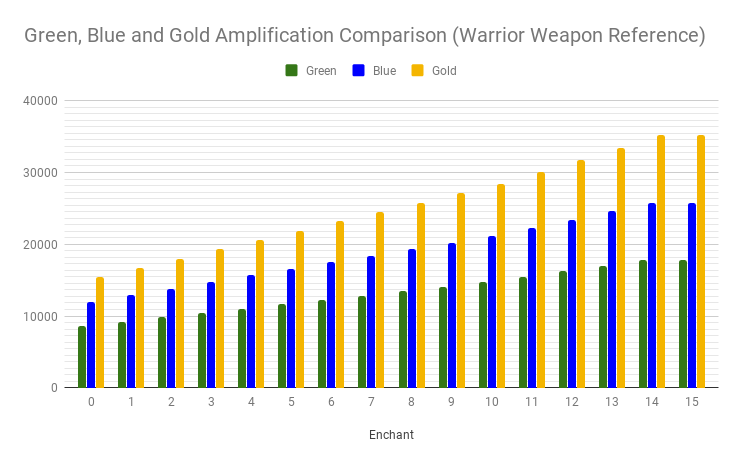 At the appropriate enchant level, you can do "more damage" than your equivalent legacy gear. But if you were to equip Gold+15 today with no other changes, it wouldn't result in crazy damage immediately. Based on personal testing, using a HO+1 weapon and HO+0 gear vs a mix of Gold +9 weapon and Blue +10 gloves with HO gear, I got consistently better damage with the HO equipment on the training crab. In live dungeons the results are mixed as the boss is moving around more. Your mileage may vary.

You are still a critical factor in how much damage you do.

It's kind of like after the enchanting event before Patch 86. A lot of people got to HO+0 from low SC with the 4x enchant success rate. For about a month, you would see people with HO weapons in instances that were doing mediocre damage. They didn't know how to play their class at the same tier that their gear would have required if it was acquired at the old, slow rate. It's not a bad thing, just an example of how important your own play is compared to your gear.

Should you bother with legacy gearing? If you want to go with new gear, you're either dropping a lot of gold to buy your base gear and enchants, or no-life'ing Exodor Mobs and AQ for materials and hoping for gold gear drops for your class. There's also the alternative gold gear, "eternal" gear. It still requires farming Exodor but you can direct purchase it after you get enough reputation. The eternal gear is are also missing the extra RNG enchant lines. If you plan on going to Mythic gear, the eternal gear appears to be a percentage lower in damage if used as a base for Mythic gear compared to the regular gold gear. If you're chill with grinding the newer content and can actually do it, you might as well go for newer gear. But if you're just getting started in TERA and new to 65, don't kill yourself trying to get to 68 in order to use new gear. Play the game and find the content you enjoy.