Image from the Valkyrie Class page on the En Masse website here.

However, Grey also quit TERA recently (Q4, 2019) and hasn't updated the guide to patch 86 with the release of new gear. The guide is still useful for the time being and it will likely be passed on to another Valkyrie player from the discord and updated later. The information on this page is largely based on the guide as well as snippets of info from the discord.

"So as I said before, I'll revise a few things on the guide. However, since I don't play anymore, I don't really feel comfortable going too in depth with it. And because I know exactly how lazy this community is, I know that another one probably won't get made for a long time due to the sheer amount of upfront work that needs to go into it. I'll be giving it to Dreaming after my edits. I'd like @Rowockiezzz , @Isaeria , and @Antiowope to add to it because I think they are collectively the most competent valkyries here."

"The biggest flaw in my guide as well as my valk playstyle was I was very theoretical and "by the books" and my own stubbornness hindered my dps as well as my growth as a valk. I think that multiple authors would be a great improvement as long as it stems from the core fundamentals and basic principles of valk. A word of the wise tho: Different perspectives are nice but getting too crazy will confuse your audience. That's what this discord is for anyways.

Read more in what is a crit cap anyway?

The main skills that are contributing to your damage are shining crescent, twilight waltz, groundbash, leaping slash, gungirs bite, and maelstrom. You can achieve almost 100% crit rate on these without much crit factor. Also keep in mind that ground bash, maelstrom, and gungir's bite will all increase in damage as you advance the associated Tal advanced skill.

Weapon / Gloves - Energetic and Pumped
Chest / Boots - Grounded
Everything else - add Power as needed (since you'll want to have easily swappable crit factor through your innies, crystals, and relic/halidom)
See What Are Etchings and How to Get Them for more information.

Check out the Valkyrie guide glyph page for the same info. I'm only copying some of the glyph pages with notes for convenience. There are additional glyph pages on the source page from Grey.

See How To Get All Your Skill Glyphs for help with acquiring uncommon and rare glyphs.

These will be the glyphs you will use until you get your Awakening skills and glyph points. 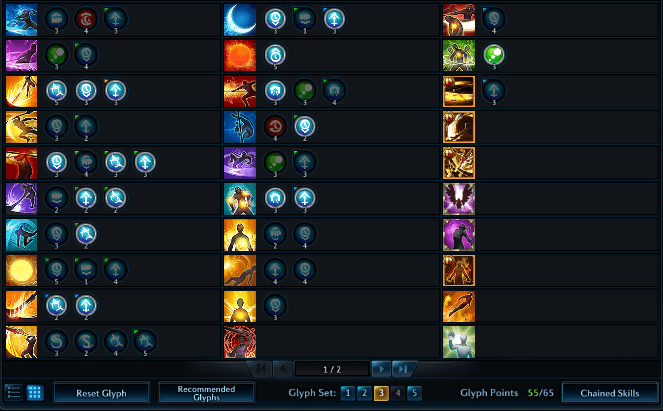 This will be your basic kit and caboodle. Run 2 of the circled red glyphs or all 3 of the yellow ones. 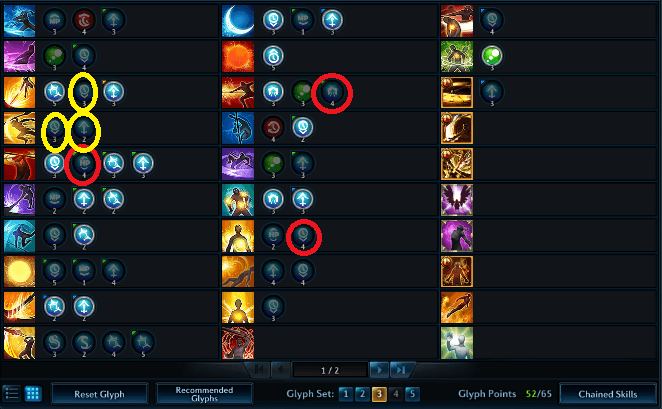 One more left to go

Use one red circled glyph and one yellow circled glyph. (It should differ depending on your gear and the dungeon that you are running.) 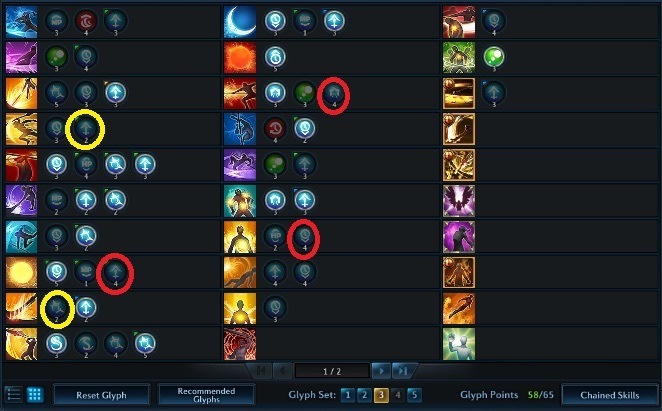 These glyphs are probably the ones that will be used in most content. Due to Maelstrom's Advanced Skill giving us 40 crit when maxed, the crit glyphs for Glaive Strike and Ground Bash become less needed. Running the minimal amount of Crit Factor from your gear will still be enough to get a high crit rate across your big skills. With Ground Bash doing almost as much as Glaive Strike at max, we can now invest into Dreamslash to do even more damage at around 70% crit rate. 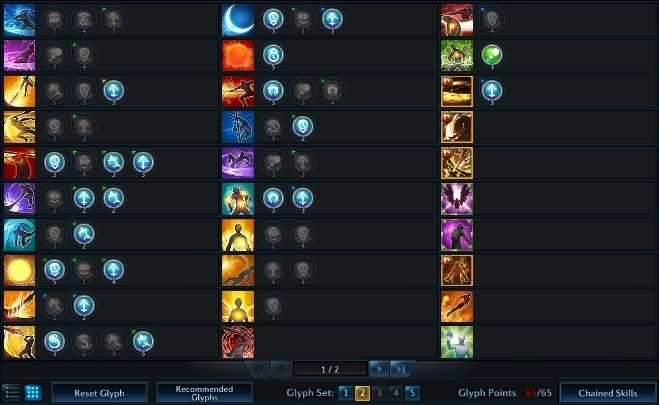 Again, go to the source for ground truth. Here's a quick reference image from the Discord and the names for easier searching, and a note from the discord: 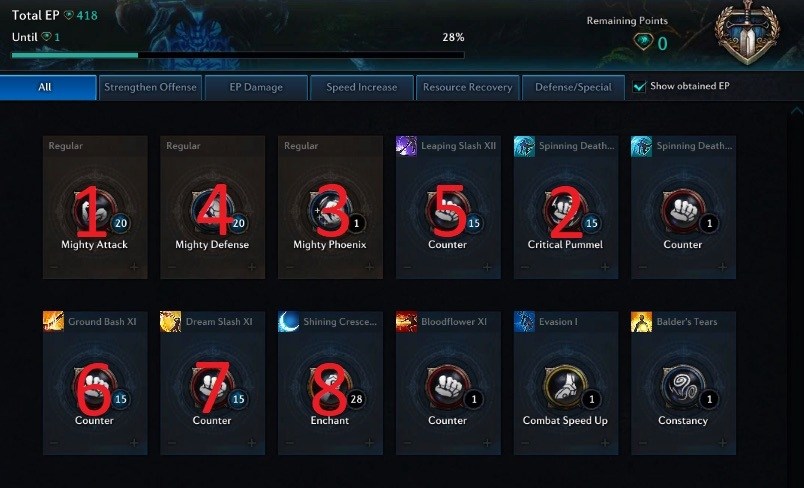 "at level 70, Shining Crescent attack modifier becomes a viable addition due to the level increase and the way this works. may change later, but as of now this is pretty solid.

its worth noting that you can probably put points in

as well. with the 28 points I have in

, its at +450 attack modifier, so you may indeed get better results putting about 20-30 points in

Here's a reference pic and notes from the discord.

I strongly recommend putting at least one point in each advanced skill - regardless of the order - and then stacking according to the order."

Check the source for ground truth. The Patch 86 rotation is different from the most recent listing and you'll have to go through the discord chat to figure it out. The rotations on the Grey guide go through four stages: 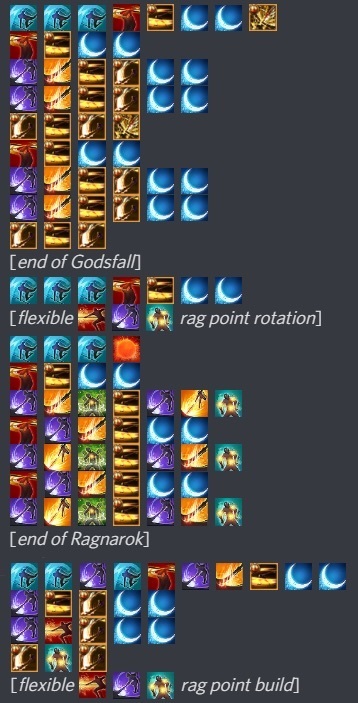 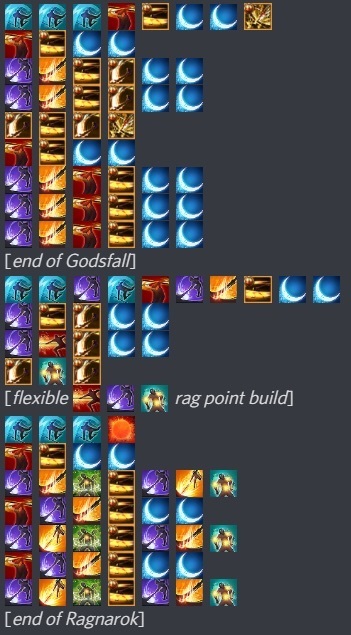 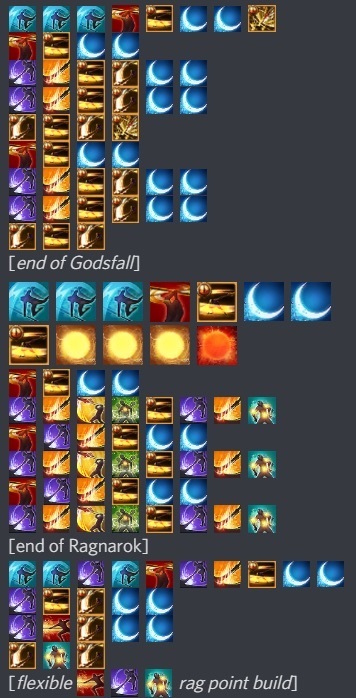 You'll also want to read through the fundamentals page that goes over some overarching themes and goals for Valkyrie play.

Changes with the new gear

Leaping slash and ground bash have moved up in priority and Runeburst is almost completely absent from the rotation. No one has documented it explicitly outside of the discord chat and the change is described with "more or less" as a qualifier. Yeah... at some point I'll try to go through the discord and pull out some concrete information on how to change the rotation around.

Outside of Ragnarok and Godsfall, you are told to "freestyle" with Leaping Strike resets to build Ragnarok points. In reality you'll get into a pattern over time with some improvisation as mechanics interrupt you. Here's a reference for learning the leaping resets and also tracking your Runemarks. Note that although Titansbane can generate Runemarks when you are in Ragnarok, you should really never use it that way. But since it can generate Runemarks, it's noted here. 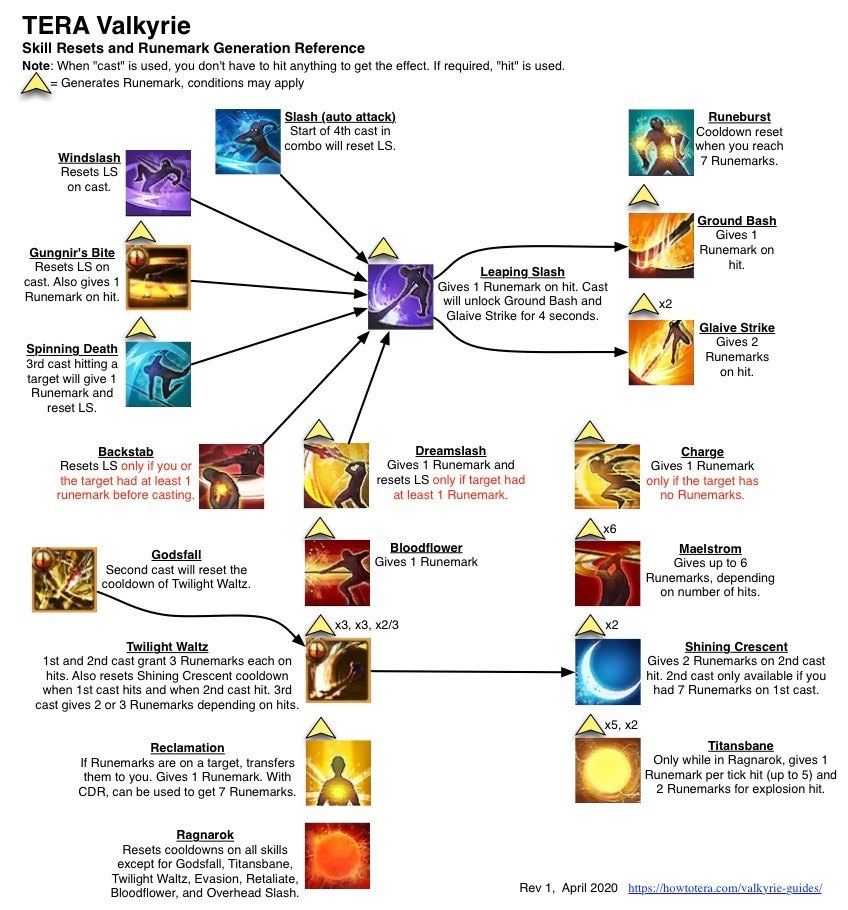 If you cast ragnarok and then cancel the animation with evasive roll, it'll count as a new skill cast that gives you another 30s of full ragnarok point maintenance. Be careful not to try a raganarok cancel when evasive roll is on cooldown or when you have a lot of ping jitter that may case your evasive roll to desync and miss. You can try using both evasive rolls (cast, wait a second or two, cast) to make sure the cancel happens.

Balder's Tears will let you take 3 ticks of damage with 80% damage reduction. You can do dumb stuff like facetank RK9 bombs, Kylos lighting 1-hp mech, and Antaroth's orb mechanic in normal mode. Try playing with it and consider using the cooldown reduction glyph if you want more chances to facetank.

Self Heal with Maelstrom

Most classes offer some kind of self-heal option. Maelstrom seems like the most absurd one out of all the classes. It might seem lame using a self-heal glyph but if you're doing solo stuff or playing the IMS lottery, a solid self-heal option may greatly improve your quality of life.

Here I used Glaive Strike for simplicity instead of double Ground Bash during Ragnarok. I also fucked up on my 3rd Twilight Waltz rotation, forgetting to Leaping Slash before Gungnir's Bite. This shorted me 30 points and ultimately delayed an otherwise perfect rag gen cycle by a second or two until I waited for Bloodflower to come off cooldown.

Anyways, here's a rotation video guide a few of you have requested:

The video above was originally linked to the one Grey posted in the Valkyrie Discord. I checked it out more closely and noticed that there was some desktop / other app content at the beginning and end, the chat box was still visible, and it was originally unlisted. So I edited it down and censored the chat for a repost. Check out the original in the Valkyrie Discord.

Keep in mind this is an older rotation now so it will line up with the icon-based rotations listed earlier but will be off from current meta.